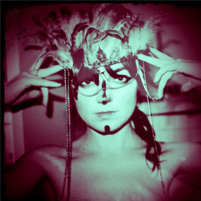 IN A TIME WHERE MANY ONCE SO POWERFUL SYMBOLS ARE IN THE RUBBLES, A NEW SET OF AESTHETICS AND A NEW WAY OF BEING IN THE WORLD IS EMERGING.

As articulated by Bret Easton Ellis in an online article last year, we are experiencing the end of ‘Empire’ and witnessing the appearance of Post-Empire. In his article, Easton Ellis holds an interview with American actor Charlie Sheen, as an example of this new way of being in the world. The journalist interviewing Sheen, with her perfect appearance and puritan set of values, becomes the example of ‘Empire’, while Sheen opposite her– open about his drug abuse and imperfect living, symbolizes a more transparent and honest way of being.

This example may seem random, but it activated a reflection process in me and sharpened my gaze. Later I started to recognize symptoms of Post-Empire everywhere, in graphical design, music videos, political strategies, media strategies, sounds, social behavior and virtual activity. It is a culture and a set of aesthetics, where the frame is no longer an invisible frame of authority. The frame has become visible, the imperfections are in your face and all the nuances of decay are upheld as just as beautiful as the perfections.

The ‘mistake’ is no longer an error, but is upheld as beauty, it’s the poetics of failure.

The ‘mistake’ is no longer an error, but is upheld as beauty, it’s the poetics of failure. Celebrity culture as we have known it, and the drama culture it has bred, will crumble, as it feeds on a constructed image of perfection, a perfection which has no place in Post-Empire. Upholding perfection as a standard in social relations, for politicians, for visual expression, is weak in its lack of acceptance of the imperfect. As we are experienc-ing the collapse of power-structures and symbols all around us, we are at a place on a collective level, where the strength in embracing imperfection is being recognized on an unconscious and conscious level. If ‘Empire’ belongs to the echoes of The Enlightenment, then Post-Empire belongs to a true acknow-ledgement of the grittiness of life.

Many are thriving on the aesthetics of imperfection.The artists that experience a boost of attention these days are people who work with imperfection, honesty and transparency as a way of being and as an expression, fulfilling peoples longing for ‘the authentic’. The viral videos by Lana del Ray, the cut-n-paste ‘anti-design’ graphics by Seapunks, the videos and visual profile of artist such as M.I.A. and Ocean View, it all comes together as a new set of aesthetics, where the frame of perfection has been exploded and made visible.

This trend may already have peeked against itself though, and a counter wave may be coming, where polished images will once again surface. I believe in the beauty of the decay and the trashiness, and that it will evolve into the future, becoming a flavour of years to come.

Lana del Ray: “Video Games”. A music-video claimed to be made by the artist herself. A trashy cut image collage of new and old YouTube videos. Here a sequence with a drunk Hollywood personality, in itself an example of the cracking façade of perfection.

M.I.A: “XXXO”. An example of another visual collage effect which creates a homemade aura and where bad taste becomes good taste. A symptom of the internet and computer generations, and their D.I.Y. (Do It Yourself) approach to editing programs, which were once only for a small group of trained professionals.

LOL Boys: “Changes”. Seapunk/Antidesign aesthetics. Seapunk is a subgenre of electronic dance music, fashion trend and design style created online by a group of social media enthusiasts. In this example it is clear how the framing of the image isn’t held back, but in itself becomes a visual style. The same was seen in the visuals M.I.A. uses for her live performances.

The Embassy of Untrue Reality

Curating and The common imagination